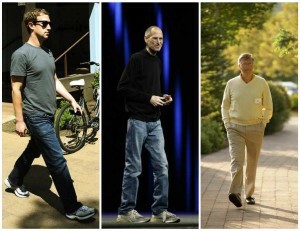 Steve Jobs – Charisma can take you far.
Steve Jobs was one of the most intelligent and innovative men to walk the planet, but he was also one of the most charismatic. Jobs was a professional at garnering excitement for new innovations and products and creating an enthusiastic crowd around him. If you truly believe in an idea, a business or a project, it is imperative that you are able to communicate that passion to other people. Without a following, one will never be a completely successful leader.

Larry Page – Be persistent.
If you really believe in an idea, see it until the end. Google Maps with Street View is a feature that almost every American has used at some point, but this feature took years to implement. Also, Google’s book digitization project took six years from the time Page conceptualized it until it was a reality. Do not be afraid of long-term projects. Oftentimes, these tend to be the most revolutionary and successful.

Tony Hsieh – Go after your passions.
This may seem obvious, but it is true, according to Tony Hsieh, CEO of Zappos. “I would say just figure out what you are actually passionate about that you’d be passionate about doing even if you never made any money from it. And that’s what you should be doing,” Hsieh said in an interview with Rob Dempsey, CEO of ADS. There’s also an old familiar saying that you should pursue whatever it is you do when you’re procrastinating. If you like doing it in your “free time,” then try to make that what you do in your “work time.” Merging your work and your interests, in some way, is imperative.

Bill Gates – Break the rules.
As most know, Bill Gates is a college dropout. While most people would reject the idea of abandoning formal education to pursue a garage-based start-up company, sometimes bold moves can make all the difference. First, you should learn the rules. Then, learn when it is necessary to break them. If you have a solid reason for ditching the status quo, then go for it. The best of the best have done it.

Mark Zuckerberg – Embrace change.
Every time Facebook makes a change to its interface or features, the users seem to verbally retaliate the adjustments. Within a few weeks, however, everyone is comfortable with the “new Facebook” and realizes that the new features make Facebook better than ever. One should never be afraid to transform their product. Innovation does not end with invention. Evolving and revolutionizing is what keeps your customers and audience coming back. Embrace these changes and learn to be flexible with what you have to offer.

Bert Doerhoff, the creator of this article, is the founder and owner of Accubiz, an accounting firm based out of Jefferson City, Missouri. Doerhoff has been selected multiple times for the “Digest 50 Award,” representing one of the top 50 CPA firms in the nation. He was also appointed to the Advisory Council to the Missouri Director of Revenue

Bert Doerhoff is an expert in all things having to do with small-business taxes and accounting. He has been chosen multiple times by the CPA Digest for the “Digest 50 Award,” representing one of the top 50 CPA firms in the country. His accounting services in Jefferson City have helped many small businesses find success.