Why My Crowdfunding Campaign Failed

Crowdfunding has a reputation as an accessible way to secure funding for startups and small businesses. It’s quick and easy; just throw up your video, backers start investing their money, and you’re set. Anyone can do it, right?

The truth is, it’s far from that simple. For every story of someone whose project went viral and exceeded its goal in the first few hours, there are several from earnest entrepreneurs whose crowdfunding efforts missed the mark.

So, why do more crowdfunding campaigns fail than succeed? What can you learn from a crowdfunding failure? I talked to entrepreneurs who’ve made crowdfunding mistakes, and got their perspective on what went wrong with their initial campaigns, and what eventually led them to success.

Most of the people I spoke to said that when it came to their crowdfunding campaigns, hindsight was 20/20. Here are the mistakes they warn others against making:

1. The launch time was off

“Day 1 is the most important because it can make you surface on Kickstarter—there are many people looking for the early bird deals—and if you get up with a lot of people who aren’t your friends right away it keeps you at the top of your category, and this is the best chance to get on the front page,” said Drew Falkman, of Falkon Productions, a technical consultant who ran a Kickstarter campaign with a client.

It’s best to research your target time zone and plan accordingly, so you generate the highest possible traffic. Intuit recommends a morning launch, Eastern Standard Time, for those in the U.S. This, of course, was information Falkman’s group gleaned later, after their first launch had been at mid-day.

2. The video was unclear

Crowdfunding platforms allow campaigners to post an explainer video so prospective backers can get a sense of the product or project that they’ll be contributing to. You can see many examples of what these are like on the Kickstarter blog. Samson Chen, CEO of Qblinks, a company that makes a smart phone remote called the Qmote, said that because they were inexperienced with video production, they hired a studio, and took a very hands-off approach during the creation process.

The result? “Most viewers could not figure out what we were doing. Even though the video was played 20,000 times, only 29% of them finished watching. Even our friends told us that they could not grasp the idea of the product and its functions,” he laments.

Just about everyone I spoke to said: Get serious about the video. Make sure it isn’t trying so hard it’s missing the mark, has attempts at humor that fall flat, or is unclear about your product. Remember that you are introducing your product and business to the world and asking for people to give you their money. For this reason, you want the video to be clear, concise, and to inspire confidence.

3. It was the wrong crowd 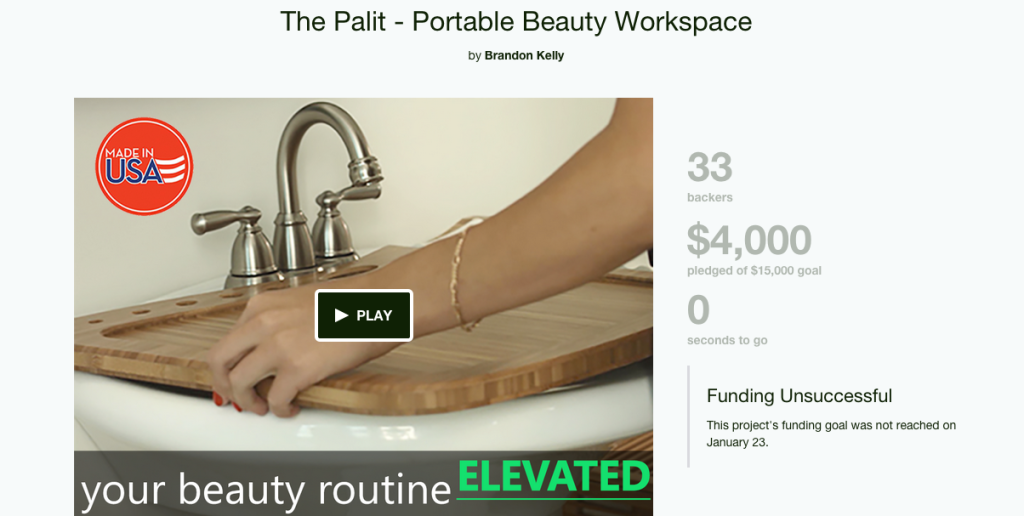 Image via Kickstarter for NYC Vanity’s product, The Palit.

Brandon Kelly of NYC Vanity ran a crowdfunding campaign for their product The Palit, a portable workspace for grooming and beauty routines in small bathrooms with no counters. They found that the crowd itself just wasn’t the right audience. Much to her surprise, after launch she found that “all of our contributors were people that we knew or friends of people that we knew.”

Look into the platform you’re using: Who are the backers? What are the popular or featured campaigns? You want to make sure your campaign appeals to the crowd, and is a good fit for the site.

See Also: 7 Things to Consider When Raising Money from Family and Friends

“‘Simple and elegant’ is better than ‘we have everything,'” Chen said, and as a writer, I couldn’t agree more. You are bursting with enthusiasm and knowledge about your business, and that is great, except for one thing: People don’t like to be overwhelmed with information.

You might have a really sophisticated and complex idea, but it needs to be distilled with some truly on-point content on your profile, so viewers come away feeling that they understand it. Don’t try to explain every detail of your technology. Rather, highlight the features that solve your customer’s problem.

So, what’s an entrepreneur to do? You gave it a shot, but it just did not work out. How do you get back on the horse so that you can actually win the race this time?

1. Launch at the right time

In addition to Falkman’s experience with a bungled mid-day launch, the day of the week can also play a factor in determining how many early contributions you’ll receive. The French startup blog Rude Baguette studied successful Kickstarter campaigns and found that while 64% of the campaigns launched on a Tuesday or Wednesday, only two that launched on a Sunday were successful. Now you might be using a different platform or have a specific date (such as a holiday) that you’re aiming to work with, so the perfect launch date will vary a bit by project. That said, make sure to do your research on time of day, the day of the week, time of the month, and season that you’re planning your launch. It matters.

Sometimes the crowdfunding backers just aren’t interested in what you have to offer—this doesn’t mean that no one outside of crowdfunding platforms will be, but it does mean that you are looking in the wrong place. Have you developed a user persona? Do you have a sense of who will be buying this product? Use this research to determine if those same demographics are using your crowdfunding platform of choice.

Qblink learned their lesson right away and took back the reigns: “We totally changed the way we worked with the studio we hired to create our videos. We hired a smaller team that had experience creating internet commercials. Before we even talked to them, we prepared most of the materials, wrote the script and listed the features we wanted to focus on,” said Chen. They also did research and determined that the successful campaigns they wanted to emulate all had videos with a length of around two minutes, and research undertaken by Rude Baguette confirms a time of two to four minutes is best. You can see that their efforts paid off in over $200,000 in funding:

4. Test your content with trusted advisors or a focus group

Often the people working at a startup are so close to the content they’ve created it can be all too easy to lose sight of whether or not it’s the most relevant or clear information. Well before launch, show the video and profile copy you’re thinking of posting to trusted advisors (especially if they’re writers!), or even people you think fit your target market. Do they understand your message? Do they like what you have to say? Adapt accordingly.

Before your campaign starts, focus on broadening your social reach to potential backers. You want the widest possible audience for your launch. Using sites like Thunderclap and Prefundia can help you get your message out there. When the campaign starts, let people know as personally as possible how excited and grateful you are that they are choosing your project to fund.

Again, this was something echoed by multiple entrepreneurs I spoke with—they regretted how little emphasis they’d placed on really connecting with backers.

People won’t just stumble upon your page. When it comes to crowdfunding, putting requests on your own social media accounts isn’t going to cut it either; you need people to become enthusiastic about your product and share it themselves so the word spreads. Several people with failed campaigns said they wished they’d been more active and given regular updates, and generally built community before and during the process.

Crowdfunding: One option among many

[pullquote]”Entrepreneur reports that just 44% of all Kickstarter campaigns are successful.”[/pullquote]

There are no guarantees with crowdfunding; Entrepreneur reports that just 44% of all Kickstarter campaigns are successful. Brandon Kelly of NYC Vanity summed up the experience of the many entrepreneurs I spoke with when she said “at the end of the day, no matter how much time you put into your campaign, you have to recognize that crowdfunding is merely one platform of many available to budding entrepreneurs; if it doesn’t work out, move on to the next one.” Qblinks reworked their product and content, and relaunched a year later to resounding success—they were fully funded on Kickstarter within 24 hours on their second attempt.

None of the business owners I talked to said that they gave up on their business when their crowdfunding campaign failed. They all either went back to the drawing board, reworked the campaign and found success, or they decided crowdfunding wasn’t the most appropriate option and sought alternate methods of funding. There’s nothing wrong with making a mistake in business, as long as you take stock of what went wrong and move forward, all the wiser.

Did your crowdfunding campaign avoid these mistakes? What advice do you have for entrepreneurs hoping to achieve crowdfunding success? Share with us in the comments below.