A Pirate’s Life for Me … Not

While I have to admit I sometimes worry that we over-dramatize the adventure of entrepreneurship, there’s also something to be said for the occasional reminder that building a business, when it goes right, can be quite an adventure. 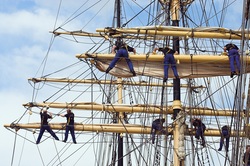 Michael Arrington, founder of TechCrunch, posted Are You a Pirate? over the weekend, a thoughtful celebration of the adventure of entrepreneurship. In contrast to normal people, he says:

Entrepreneurs, though, are all screwed up. They don’t need to be rewarded for risk, because they actually get utility out of risk itself. In other words, they like adventure.

I don’t fully agree with that myself — it doesn’t match my own experience — but Michael Arrington has earned the right to say that. He’s paid his dues. As he explains:

In my youth I was a corporate lawyer, making a very nice salary for representing technology startups in Silicon Valley. There was a good chance I’d make partner after seven to eight years and could be earning maybe a million dollars a year by the time I was 40. All I had to do was work hard and bring in clients. I was good at both.

But I left the law after just three years to join a startup. And the reason I did it was adventure. I wanted to be in the game, not just watching it. My parents thought I was crazy. They still have no real idea of what I do for a living, and they were, frankly, pissed off that I spent their money getting a law degree, only to throw it away before I was 30.

But I did it, anyway. And then I left that company after a year to start my own company. And I’ve never looked back since then. That first company I started made a lot of money for the venture capitalists — nearly $30 million — but next to nothing for the founders. The companies I started after that varied between failures and mediocre successes. But at no point did I ever consider getting a “real job.” That felt like a black-and-white world, and I wanted technicolor. Also, I hate working for other people because I’m really bad at it.

Why the (albeit slight) disagreement? I guess it’s because I always use the plan to manage the risk. I like building a company and making things happen, but the risk is a necessary downside, not the point.

Why did some people way back in the 17th century, or whenever, become pirates? The likely payoff was abysmal, I imagine. There’s a very small chance you’d make a fortune from some prize, and a very large chance you’d drown, or be hung, or shot or whatever. And living on a small ship with a hundred other guys must have sucked, even for the captain.

But in my fantasy pirate world these guys just had really screwed up risk-aversion algorithms. Unlike most of the other people, they actually lusted after that risk. The potential for riches was just an argument for the venture. But the real payoff was the pirate life itself.

So I’ve been entrepreneur, not as successful as some, but I’ve survived and raised a family, and I would have failed as a pirate. Living on the ship with a hundred other guys would have been dreadful, but I would have been one of those who drowned, or was hung, or shot or whatever.

I wanted to do what I liked, and make enough money, and have time left over for family. I planned a lot. And I took risks when I had to, but because the rewards were worth it, or so it seemed at the time.

Still, what the heck, as I write this (yesterday afternoon) it’s Halloween, and pirate sounds pretty good at the moment. So I finish with Michael Arrington’s rousing conclusion:

There are lots of things that I will probably never experience in this life. Military combat. Being dictator of a small central American country. Dunking a basketball. Being a famous rock star. Or walking on Mars.

But one thing I have been, and will always be, is an entrepreneur. And dammit, that feels pretty good. Because if I were a lawyer right now, even a rich lawyer, I’d always have wondered if I had what it takes to do something a little more adventurous with my life than work for someone else.

You’ve Either Started a Company or you Haven’t

Jump To Your Own Work/Life Conclusion

A Good Book for Integrating Business with Life

You’ve Either Started a Company or you Haven’t

Jump To Your Own Work/Life Conclusion