This information comes from the Center for Venture Research at the University of New Hampshire, via the National Dialogue for Entrepreneurship newsletter.

Not surprisingly, software led the field with 27 percent of the money invested, followed by the very powerful “other” category, then health (including health care, medical devices and medical equipment), biotech, and industrial or energy. The statistics don’t show green technology emerging, but that’s probably because the categories are set up differently. Green could be in a lot of different categories. 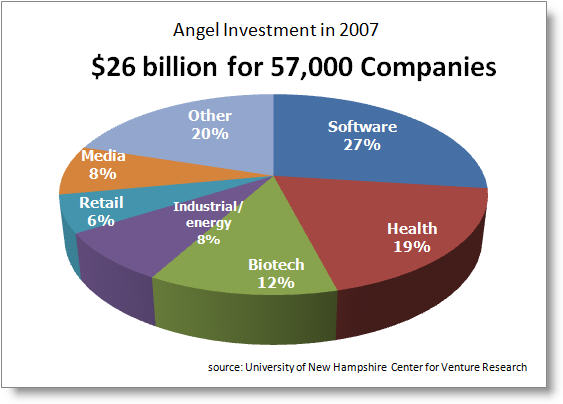 More from the report (quoting) :

And one last point, from my calculations: With the number of investments rising much more sharply than the amount invested, it looks like the average deal size went down to $440,000 from $500,000 a year earlier. This seems reasonable to me, another indication of the quicker and cheaper conception-to-market-entry cycle in Web 2.0.