What Successful Freelancers Wish They’d Known from the Start

The idea of starting your own business may sound daunting, but the reality is that the economic downturn has forced a lot of Americans to start working for themselves, either by setting up their own venture, or working as a freelancer. In fact, recent research predicts that 40% of America’s workforce will be self-employed by 2020. That’s 60 million people!

If you’ve recently gone self-employed—by choice or otherwise—you’ll know it’s a big change from having a regular nine to five, and it can be hard to start making money. Thankfully, the internet age means the newly self-employed can access a wealth of tips and advice on how to make it through those difficult first few months.

Once you’ve come to grips with it, self-employment can be very rewarding, offering you a more flexible way to work, and the potential to earn a lot more than you would in a permanent position. So, what situations are people finding themselves in and how are they managing?

See Also: What I Wish I’d Known Before I Started My Business

Hannah Martin, freelance copywriter and co-founder of an online magazine for working moms, says that when she became a parent she saw no other choice but to become self-employed:

“After I had my son, I went back to work when he was four months old, straight back into a full-time job. With commuting my days were at least 14 hours long, so my son was raised by an au pair, pretty much.

I just wanted a better quality of life, so I decided if I go freelance—because you earn a lot more—I’d work two weeks a month, then I’d take two weeks off. It felt like I was jumping off a cliff, but it was the right thing to do.”

Hannah says that the key to starting your own business is to understand your target market: “To be a freelancer, someone needs to hire you, so you need to understand who needs your services, what problem they have that you’re going to solve, and what makes you the right person to offer them a solution.”

Not everyone goes freelance by choice. Jo Petty, a freelance content consultant, was let go from her full time job and couldn’t find a decent alternative. She decided to take matters into her own hands and used the skills she learned whilst employed to launch her own consultancy. Jo said:

“First, I set up my website, on which I put up some work I’d already done, an ‘about me’ and what services I could offer people. Then I created a template email and sent it out to about 100 businesses—mostly digital marketing companies, agencies, and people I knew in my city. From that, a few people responded, and it all kind of snowballed from there.”

For Jo, one of the biggest challenges was deciding how much she should charge for her services:

“When you’re working full time you don’t really put a value on yourself—you know you work for a certain amount a year, but you don’t know how to put it into an hourly rate, or how to factor in the amount of time and money you have to spend marketing yourself. First of all I probably charged really stupid amounts, but through attending a local coworking space I learned how much other people were charging and that helped me set my own rates.”

See Also: 5 Tips on How to Set Consulting Fees

For many, one of the hardest things about going self-employed is the lack of support. Most of us are used to being surrounded by colleagues who either tell us exactly what to do, or can help us out when we’re lost. Thankfully, coworking spaces for freelancers and entrepreneurs are becoming ever more prevalent.

Sky Apperly, a freelance software developer, has been using coworking spaces for many years. He says that the benefits are massive:

“It’s great to use a coworking space. It lets you get out of the house and you meet other people in your field who you can get work from. You can always help others get work and in return they’ll help you out. There’s also always a kitchen area where you can hang out with other freelancers, find out what they’re doing and exchange tips and advice. For me personally, I can get more done when I go out to a coworking space than when I’m sitting alone at home.”

See Also: 5 Creative Ways to Save Your Business Money

It’s tempting to think of fellow freelancers as competitors, but that often isn’t the case. Freelancers usually develop a niche specialty, so it’s rare that someone in the same coworking space as you will be competing for the same clients. Freelancers instead tend to band together, as part of a growing culture of mutual respect and support.

This short film, produced by a UK accounting firm specializing in accountancy for the self-employed, further explores the trials and tribulations of starting your own business. Hear more from Hannah, Jo, and Sky, and meet other self-employed veterans, each with their own unique hints and tips. 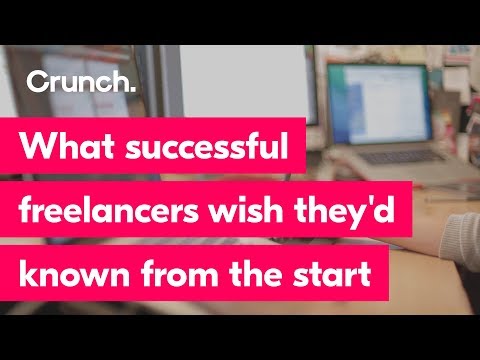 Nick Chowdrey is a staff writer for specialist freelancer and contractor accountants, Crunch. He specializes in writing about technology and business, and is a frequent contributor to a variety of online publications and industry blogs.