The Biggest Business Fails of 2014 and How to Avoid Them

Every year, a few businesses make bad decisions or mistakes publicly. Sometimes they recover quickly and no one notices. Other times, the blunders are nothing short of newsworthy. We’ve gathered up some of the worst fails of 2014 and included some helpful tips on how to avoid them yourself.

Walmart asks its employees to purchase their own uniforms

Walmart is at it again; the world’s largest company (and the biggest private employer with over 2 million workers globally) is unfortunately known for short-changing its employees, including a widely publicized incident last year where one Ohio store threw a food drive for its own workers.

This year, Walmart employees are required to purchase new clothing to be able to work in the stores. What does that mean for those employees? A Wharton business school analysis breaks it down: for the numerous workers getting paid under a thousand dollars a month, the estimated fifty dollars of dress code expenses is no small request. They also believe this move leaves Walmart open to a possible class action lawsuit.

This is just the latest incident contributing to Walmart’s ongoing negative image as a company that drains the resources of surrounding communities by providing insufficient pay and driving out independent business. 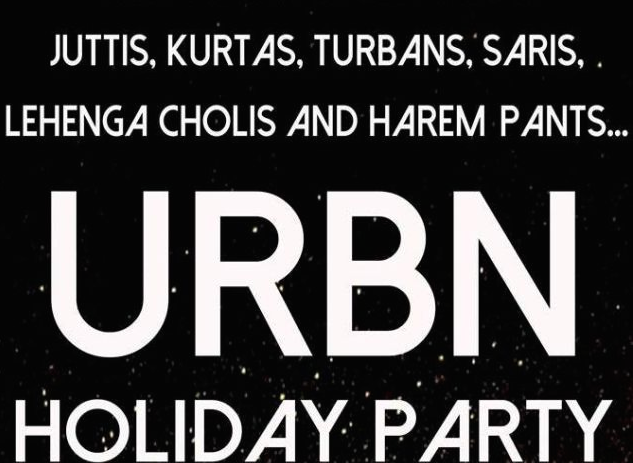 Urban Outfitters, which also owns Anthropologie, Free People, and Terrain is no stranger to controversy. In fact, they’ve gained a reputation for their often-repeated offensive missteps.

Sometimes the blunders have seemed unbelievable: marketing t-shirts to young girls—the demographic with the largest percentage of body image problems and eating disorders—that said “Eat Less,” and the Navajo Nation sued after the company introduced a line of questionable products erroneously using their name (it is illegal in the United States to falsely represent merchandise as if it was created by native tribes).

“I doubt that you consulted the Navajo Nation about using their tribal name on sophisticated items such as the ‘Navajo Hipster Panty,'” wrote Navajo Nation member Sasha Houston Brown. These items, along with many others, were also quietly discontinued.

This year, they released a holiday party invitation to their employees (pictured above) encouraging people to wear a carelessly thrown together list of traditionally Asian and Middle Eastern clothing items, a move that many felt was unnecessary and culturally insensitive.

It can’t come as a surprise that they are currently seeing low numbers, with stock down seventeen percent since the start of the year. Interestingly, Urban Outfitters still reported third quarter sales of 47 million dollars, one million less than the total money raised on #GivingTuesday this year.

Tinder delivers a million dollars worth of sexism

The scandal over Tinder CEO Sean Rad and CMO Justin Mateen sexually harassing fellow cofounder Whitney Wolfe ended in a million dollar settlement and horrible publicity for the company. Among the many sexist and racist statements they made, the two male cofounders reportedly told Wolfe they didn’t want to acknowledge her role as a cofounder because having a woman listed among the other founders “makes the company look like an accident.”

Many of Mateen’s sexist and racist text messages to Wolfe were made public as a result of the trial. Mateen was fired, and Forbes reports that the sexual harassment suit also contributed to the recent decision to replace Tinder CEO Sean Rad.

Microsoft has some really bad karma 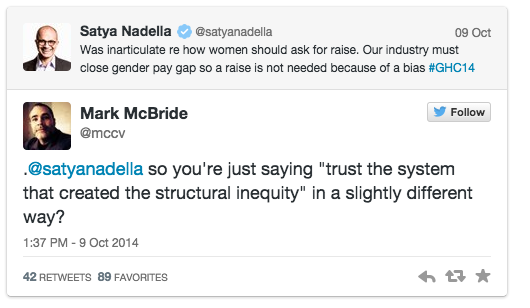 The audience was in disbelief when Microsoft CEO publicly announced to a room full of people at an industry women’s event that women should “trust in karma” to get raises, while in the U.S. women make 22 cents on the dollar less than men for the same work.

While Nadella later to took to Twitter to apologize, many saw it as too little too late, especially with news of his 84 million dollar compensation package coming right on the heels. He has publicly stated that Microsoft has no pay discrepancy between men and women doing equal work, but as CNN reports, women make up only 17 percent of the higher ranking technical positions in the company, and only three members of the fifteen person leadership team are women.

These business fails have a couple of themes. One theme is leaving yourself open where you are weak; as in the case of Walmart and Urban Outfitters, the long and short of it is they should have known better. The companies are both obviously struggling with image problems, and they walked right into criticism.

Another major theme is showing bias, which we’ve seen before is a harbinger of massive problems. In this day and age, there is less wiggle room and public sympathy for cultural insensitivity, racism, sexism, and overall prejudice. When it comes to egregious behavior like that of Tinder’s former executives, sometimes it really is as simple as taking some time to put yourself in another person’s shoes, or imagine the reactions if news of it goes public.

How to avoid these mistakes:

What’s the worst business fail you’ve heard of this year? Got anything that can top these?