Cats With Your Coffee? What Entrepreneurs Can Learn From Purringtons Cat Cafe 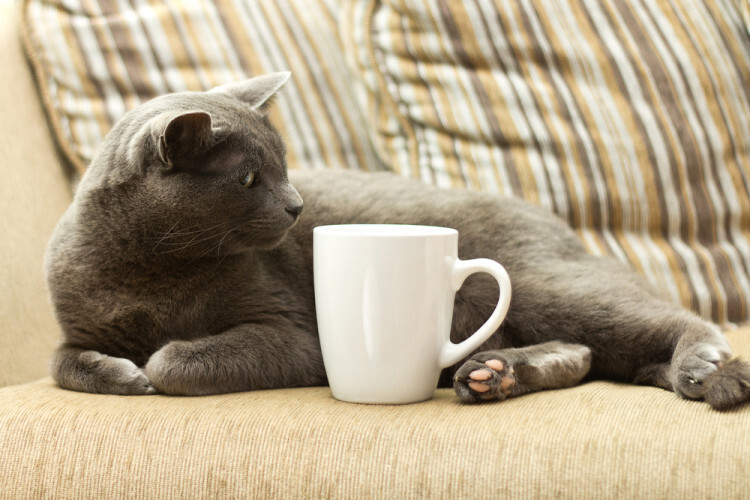 Editor’s note: Purringtons Cat Lounge has now successfully opened for business! Visit them on their website.

Over a year ago, I first heard the rumor that a cat cafe had opened in London.

To me, it seemed a whimsical, storybook sort of place, where one could get a cup of tea and pet a cat at the same time. Charming, I thought, but a bit unbelievable—did such an establishment really exist?

After a bit more research, I learned that these cafes were quite real, and first gained popularity in Japan, where tiny apartment dwelling often makes it impossible to keep pets. As much as I was tickled by the idea of playing with kitties while having a cup of coffee, I brushed it off as a novelty establishment that I would never get the chance to visit.

However, the interest in cat cafes stateside is certainly growing. In the last year alone, several have opened across the United States, with cafes in New York City, Oakland, California, and soon, Portland Oregon. I spoke with wife and husband team Kristen and Sergio Castillo, whose cat cafe, Purringtons, is set to open in Portland at the end of January.

It’s a story we’ve all heard before: Unfulfilled by her corporate job, Kristen Castillo longed for a new direction. Then, in October of 2014, she was sent a video on Facebook of a cat cafe in Paris.

“I had an epiphany,” Kristen says. “I literally started making phone calls the very next day, and have been working toward [opening the cafe] ever since.”

For Kristen, the idea of a cat cafe was exactly what she had been looking for. In April of 2014, she quit her job to devote her time fully to the project, and with the help of her husband and business partner Sergio, the pair have been working tirelessly toward their goal of opening Purringtons Cat Lounge.

Going boldly where few cats have gone before

The Castillos are in a unique position—by opening a cat cafe in the U.S., they are treading on very new ground. The cat cafe business model is incredibly new, and as such, there is much less in the way of a road map for these entrepreneurs to follow.

How do you open a business unlike any other? In the instance of a cat cafe, Kristen discussed the difficulty in managing the opening of what is essentially two distinct businesses.

“It’s like starting two major businesses in one,” Kristen says. Purringtons will operate both as a restaurant and as a shelter where cats live on-site; they even plan on adopting out the cats to interested patrons.

This presents distinct challenges, as the business is so multifaceted. “What we are doing is unprecedented,” says Kristen, and she is right—Purringtons will be the first cat cafe in the United States to operate with live-in animals on the premises and a full restaurant, serving beer, wine, and food made on-site. “There are no guidelines,” says Kristen, which has made opening Purringtons a learning experience.

Opening a cat cafe: An education in entrepreneurship

For the Castillos, Purringtons will be their first business endeavor. “It’s been quite an education,” says Kristen, who notes that opening your first business will inevitably mean running into situations you are not prepared for.

See Also: What Should All Entrepreneurs Know Before Starting Their Very First Business?

An unexpected challenge came in the form of finding an appropriate space for Purringtons, as the uniqueness of the cafe made it difficult to find both an acceptable layout, and a landlord willing to allow cats to live on the premises. Ultimately, the Castillos were contacted directly by a building owner who had heard of their plan to open a cat cafe, and they redesigned the space from the ground up, with the required layout. 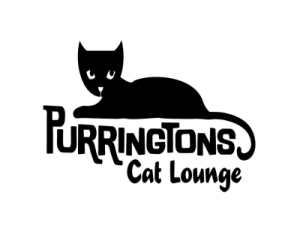 “It was almost better to have it designed from scratch,” says Kristen, who worked with a designer to make sure the space fitted both their aesthetic requirements and was up to code.

This allowed the Castillos to plan the layout themselves—including double doors and enough separation between kitchen and lounge, to ensure that no cats ever have a chance to enter food preparation areas.

Planning Purringtons from scratch allowed the Castillos the freedom to determine what they wanted from the space—and equally important, what they didn’t want. For Kristen, it was important to avoid a clinical, fluorescent feel. “We wanted to make it aesthetically pleasing, with good lighting and good music and comfy furniture, and make it an experience,” she says.

Though opening their first business has not been without its challenges, the Castillos are enjoying the process.“You have to live dangerously enough to take a chance, but also know to ask the questions to help you along,” says Sergio.

If the Castillos had planned to open any old restaurant or cafe, they would have found a vast number of resources on how to do so, from restaurant business plans to advice from industry veterans.

However, for an establishment combining animal shelter and restaurant, the Castillos didn’t just throw out the playbook, they rewrote it completely. With little to go on and few footsteps to follow, Kristen and Sergio did their own research. “We are just really figuring it out on our own,” Kristen said. They researched existing cat cafes abroad, reached out to owners, and spoke with city officials.

If you are starting a business with a unique angle, you may find that you have more limited resources. The Castillo’s advice? Research, research, research. “Do your research, talk to other people…get advice and hear people’s stories,” Kristen says.

2. Phone calls and emails only go so far

While you might be inclined to seek information via email, Kristen says a face-to-face meeting is often the better way to go. In combining an animal shelter and restaurant, the Castillos knew they would need to comply with various health codes.

Instead of sending an email, they went to the health department in person. “When you speak to someone over the phone…they’re just regurgitating code,” Kristen says. When they spoke to someone in person, it was much easier to get their questions answered. “He just said, here’s what you’ve got to do,” Kristen says.

As you go through the steps of opening your business, you are bound to have specific questions. While emails and phone calls are a good place to start, consider speaking to someone in person when possible—it could save you time and get you the detailed answers you need quickly.

3. Create a business plan—even if you never show it to anyone

We frequently promote this idea at Palo Alto Software; our founder Tim Berry even wrote the book on it. The planning process is essential, even if you are the only one to ever see the plan.

The Castillos created a business plan for Purringtons, but ended up “never really showing the plan to anyone.” However, Kristen says the process was invaluable. “It forces you to think about things, to get organized, and to address issues you never even knew [you had],” she says.

Your business plan doesn’t need to be lengthy—in fact, a one page business plan will often work just fine. The important part? Actually doing the planning.

See Also: 7 Reasons to Create a One-Page Pitch Before You Plan

4. Don’t bank on wild success from a crowdfunding campaign

So, you have your business idea, you’ve done some research and planning, and you are ready to fundraise. So many businesses have had runaway success with crowdfunding campaigns—why not give it a try?

Not so fast. While crowdfunding can be a great way to raise money, it isn’t a given or a guarantee. The Castillos fundraising campaign on popular crowd funding site Indigogo, while it taught them valuable lessons and helped garner press, was not as successful as they might have hoped. “I think it was good for publicity, I think it was good to get out there, but we didn’t do so great in the fundraising part,” says Kristen, who notes that having a larger social media following is often crucial to reaching enough people to make crowdfunding a success.

Sergio agrees: “If you have a bigger foothold in social media than we did, you’re going to get further along…get as many [followers] as you can on Instagram, on Facebook, on anything you can that allows you to spread that word.”

Should you eschew crowdfunding entirely? Of course not—but don’t put all your eggs in such an uncertain basket. Secure as many other sources of funding as possible, and make sure you have a large enough following to draw on to make your crowdfunding efforts pay off.

See Also: Shoestring Marketing Budget? Get Your Customers to Do It For You

5. Get in on the ground floor of an idea

“If we were just opening another cafe, we wouldn’t be a blip,” Kristen says, and she is right—in a town like Portland that is flooded with cafes and restaurants, you need to stand out. A cafe where you can pet kitties, and even take one home? Now that is newsworthy. Cat cafes are in the works all over the U.S., and their growing popularity has put Purringtons in the spotlight. “These cafes are really getting a lot of attention,” Sergio says, which has helped Purringtons achieve a level of publicity they would not otherwise have had access to.

Does your business have a unique angle that could be the newest craze, or are you interested in opening a business that is trending? The sooner you do so, the better—a new, popular idea will garner you far more attention than something that has been done often before. As Kristen says, “you can’t beat the free press.”

6. Do something that fits your community

“This place is full of animal lovers…they love anything novel and weird,” says Kristen. It’s very true; Portland is a community that enjoys its cafes, animals, a healthy amount of quirk. It seems an excellent fit for the community; “I just can’t believe there’s not one here already!” Kristen says.

Is your business one that will fit well in your local community? Does it have a niche that you know everyone will fall in love with? Sometimes this can mean the difference between a surviving business and a thriving one.

Opening Purringtons has also given the Castillos an opportunity to give back to their community, and do something that can bring happiness to many. “It’s nice to have an opportunity to be a part of that,” Sergio says. “The greater good that you’re providing…it feels good.”

Are you looking forward to a cat cafe opening in your neighborhood? What do you think of this unique new business model? Let us know in the comments below, or on Twitter!

This article is part of our Cafe Business Startup Guide—a curated list of articles to help you plan, start, and grow your cafe business!