The Difference Between Cash and Profits

Cash is king. You’ve heard it before, but do you know what it really means?

I learned how to manage cash flow first in business school, in a classroom setting, but it didn’t really mean anything to me until years later, as I was building my own business. As my sales and profits skyrocketed, my cash flow dropped. What had once been a classroom exercise was now playing out in real life as I found myself in danger of going under and missing payroll, while it seemed like business was booming.

I’ve seen in the decades since then that a lot of us fall into the same trap that caught me: We think in profits, but we spend cash. Our culture encourages us to think that way; it’s built-in. The classic business plan on a napkin is about selling something for a lot more than it costs you to build it. In the long term, that should be enough, but it isn’t always the case.

So, the moral of this story is do as I say, not as I did. Mind your cash flow. Don’t confuse profits with cash. I did manage to crawl out of the temporary cash flow problem, but it took extra mortgages and heavy credit card debt.

Cash vs Profits vs Revenue – The Differences Explained

The problem with cash in business is that we tend to take it for granted. We think in profits, but we spend cash. The issue is, profits and cash are different.

Profits are calculated by subtracting expenses from sales. It doesn’t matter if your customer has actually paid you or if you’ve actually paid your bills. Sales are accounted for when you send out your invoice. Expenses work the same way — you can have an expense on your books even though you haven’t paid the bill yet.

Revenue is money coming into the business. For most accounting and financial analysis purposes, it’s the same as sales. But technically, revenue can also include sales of assets and money coming in as loans and investments.

Cash, on the other hand, is what it takes to pay your bills—the actual money you have in hand, in your bank account.

The underlying issue with understanding the difference between cash and profits is basic financial and accounting standards. Throughout the Western world, we live with a business practice rooted in the profit and loss statement, also called an income statement. It shows the performance of the business over a specific period of time, usually a month, a quarter (three months), or a year.

It starts with sales at the top, then shows direct costs (also called unit costs, and costs of goods sold, or COGS) below that. It subtracts the direct costs from the sales to show gross margin.

Then it lists expenses, including fixed expenses like rent and payroll and discretionary expenses like marketing and promotional expenses. Technically, interest and taxes are both expenses, but they often show up as separate from the operating expenses. And the profit, at the very bottom, is the result of subtracting the expenses (including interest and taxes) from the gross margin.

This grandfather of all accounting statements sets the tone for many business discussions. It sets our vocabulary too—we refer to “the top line” as sales and “the bottom line” as profits.

But here’s the problem: The profit and loss feel like it’s the whole health of the business, but in fact, it isn’t.

Sales on credit: How waiting to get paid impacts profits and cash

A business delivers the goods or services to a business customer or client along with an invoice. The check comes later. That’s extremely common in business-to-business sales, and what it means is that the amount of that invoice is included in the month’s sales, and is booked as sales—but it isn’t actually cash in the bank.

Instead, that amount sits in a bookkeeping category called accounts receivable until the check arrives and it’s deposited into the bank. The average time between delivering the invoice and receiving the money is called collection days, or collection period. The problem businesses face is that all the money in accounts receivable shows up in profits as sales, but is not in your bank account. You can’t spend it.

Profitable businesses can go under simply because they have too much money in accounts receivable, and not enough in the bank—they have trouble getting their invoices paid on time.  The money showed up in sales but never made it to the bank. Ultimately, being profitable didn’t prevent business failure.

Inventory: Buying things before you sell them

Most product businesses, such as stores, have to buy the things they sell ahead of time before they sell them. Manufacturers and assemblers have to buy components and materials before they create and sell finished goods, and that creates a lot of potential cash flow problems.

It’s called inventory: products for resale, materials for manufacturing, components for assembly. Money spent on inventory doesn’t show up in profits until they ultimately sell—but it’s gone, out of the bank, when it’s spent.

For businesses that depend on inventory, inventory management can be critical for cash flow. It’s too easy to have money tied up in inventory that sits on the shelves too long, or never gets sold. That money is gone from the bank account but doesn’t show up in the profit and loss statement.

Bills: Money in the bank versus the money you owe

The opposite of accounts receivable is called accounts payable, which is money a business owes to its vendors.

Taking 30 or more days to pay invoices is good for your own cash flow. Every dollar you have sitting in accounts payable is a dollar that counts as expenses, and decreases profits, but is in fact still a dollar in your own bank. You own that dollar until you pay it out. You subtract expenses from profits when you incur them, not when you pay them.

So payables are the opposite of receivables: with receivables, your customers have your money; with payables, you have your vendors’ money.

The difference between cash and profits: A case study

To help illustrate the difference between cash and profits, here’s an example: Garrett’s Bike Shop, a bicycle store in a medium-sized local market, with sales of about $400,000 per year.

The first chart below shows key operating numbers for that store over a few months. You see sales, direct costs, expenses, and profits.

Now we compare that to a simple cash flow projection based on the assumption that the store makes 90 percent of its sales on credit (“Net-60”) and its customers wait two months to pay those invoices (that would be unusual for a bicycle store, yes, but it’s the common case for most existing business-to-business companies).

Also, let’s assume Garrett keeps about a month’s worth of sales as products in the store, called inventory, that customers can buy, and he has to buy those products in advance of selling them. The result is cash flow vastly different from profits, as you can see in the following illustration:

The difference between profits and cash, in this case, is more than $90,000 for a business selling about $30,000 monthly. That business would be profitable but bankrupt for lack of cash.

The change in the two scenarios is just cash flow, not a penny of sales, the cost of sales, or expenses. No prices are changed, no new employees added, and no changes made in salary. 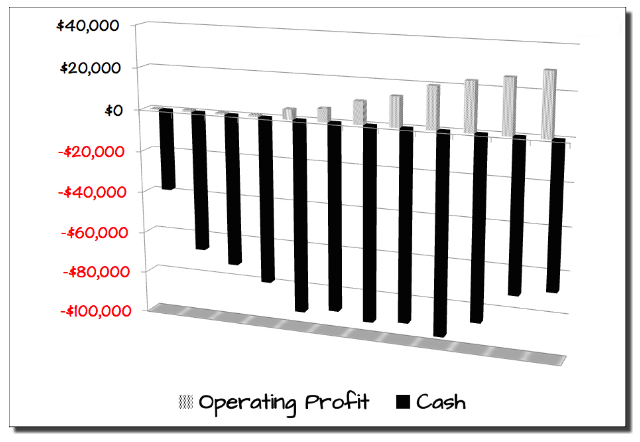 The phrase “the bottom line” is a reference to profits, which are the bottom line of the profit and loss statement. But it’s actually come to mean something like a conclusion, or the most important result. That’s why the real bottom line for business owners is cash flow, not profits.

Profitable companies can run out of money due to a lack of cash flow, and there’s no way around it. To run a business, you have to mind cash flow, not just profits.

Editor’s note: This article was updated in 2020.

The Essential Differences Between Cash and Profits

What You Really Need to Know About Cash Flow

The Essential Differences Between Cash and Profits

What You Really Need to Know About Cash Flow