Do You Hide That It’s a Home Office?

Today’s New York Times has a piece called Headquarters at Home and Proud to Be There on home office businesses not apologizing for being a home office, and not pretending to be something else. It’s a good reminder for startups, and it makes me proud to say that this is what I did for the three formative years in which my company was me in a home office. I had just a few clients, mostly large businesses, using me as a consultant in planning. Every client I dealt with back then knew I was in a home office. 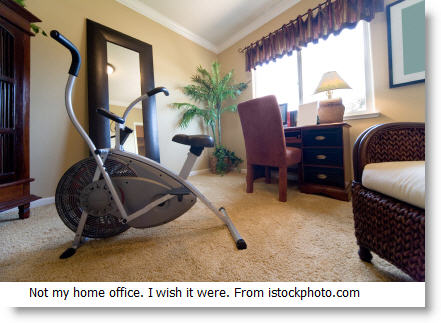 I’m glad to see that home offices gaining are stature and respectability these days. When the home office works right for you, everybody wins. Back when I started it was harder, but I never pretended, not necessarily because I was goody-goody, maybe it was also the fear that if I lied about it I’d get caught with a lie. Sometimes the dog barked in the background, and we had kids at home, so it seemed better to stick with the truth.

So I didn’t try to change my voice and be different people, I didn’t fake a receptionist, I just took my calls and dealt with it. I did have a room with a door that could be closed. This worked pretty well for me until I needed to hire an employee, which is, for me and my family at least, when the home office no longer worked.

One of my favorite reactions to that was from Hector Saldana, who was then General Manager of Apple Latin America. When I told him I had left my previous employer and was working in a home office, he said “Oh yes, I sort of assumed that, and I like that. I don’t like to pay other people’s overhead.” Hector told me later that he generally preferred the one-person consulting business because he liked to deal with the person who was doing the work. In larger consulting companies, generally, the partners sell the jobs and then the associates, who are much fresher and younger, actually do the work.

Working at home, either full time or in the evenings after working my day job, has been an important option for me, even as I built a company that now has 40 employees and cubicle space occupying a floor in a bank building. Working at home allowed me to dedicate a lot of hours to building a business I loved, but still be there with my family a lot of the time too.