Does This Street Entertainer Practice Better Marketing Than Your Company? 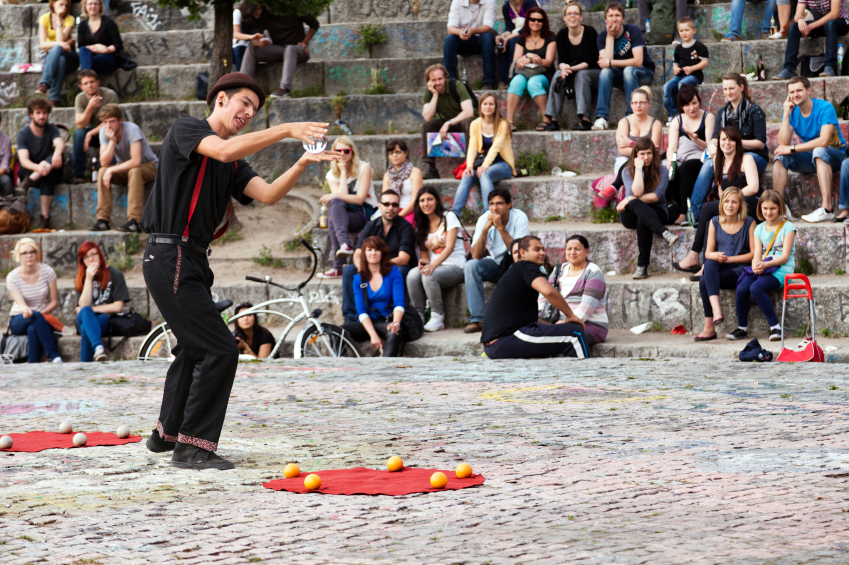 On a recent trip to Boston, I was enjoying Quincy Market when I came across a delightful street entertainer. I don’t know about you, but I love a good street entertainer—you know, one that engages the audience, is exceptional at what they do, and makes you want to stop and watch.

What was of particular interest with this street performer, though was how much he made at the end of his gig. I estimate that he made approximately $200 in 30 minutes!!

And let me tell you, he was talented, but he also used some savvy marketing techniques to help him along the way. It got me thinking: If he can incorporate all of this in 30 minutes, shouldn’t we as small business owners be able to incorporate them daily as well?

It’s not surprising that location matters in marketing, yet often we forget. Well, this performer picked his location well. He set up at the end of Quincy Market, where people are typically exiting the market armed with something to eat. It was a nice open area with staggered steps that meant everyone could sit down and easily enjoy the show while they had lunch.

It was lunch time. Peak time for a large number of visitors to be found at a popular Boston destination known for its lunch fare, and a time when people are taking a break and looking for a bit of entertainment while they enjoy their culinary delights.

Before you even knew he was there, you could hear the crowd cheer, making you curious as to the origin of the noise and fervor. He was great at getting the few first attendees to promote him, and as a result, he increased his target audience tenfold!

It’s one thing to attract customers, but in the service industry, you need to deliver or you won’t get paid. He wowed the audience with his skills and daredevil antics, while keeping it light and full of humor. In other words, he made it worth my time and money.

5. He told a story while he performed his service

You probably already know I’m a fan of stories in marketing. He had an impressive background that made you realize you weren’t just watching any street performer. In his story, he shared his credible details in a humble format. He’s been doing this for 10 years, all over the world, but Boston is his home and (of course) his favorite place to perform.

6. He asked for what he wanted and showed the value

Not only did he come out and justify donations but he named his price. In a world where $2 is probably the norm, he asked specifically for $5 if they had it, pointing out, “Where can you get entertainment for half an hour for as little as $5?”

His marketing paid off. After he finished his performance, I counted a good 50 people who came and donated (including myself). I could tell from his responses that some people had given him more than $5, and I assume some gave him less, so I think I’m conservative in estimating that he made $200. Not bad for 30 minutes of work.

I know that we are encouraged these days to take advantage of so many of the great marketing tools out there like social media, SEO, Google Adwords, and some still-successful offline tactics. But every now and then, it’s refreshing to have someone remind you of the good ol’ fundamentals of successful marketing.

I urge you to take a quick look at the foundation of your own marketing and see if this street entertainer has perhaps nailed the basics better than your firm.

Cidnee Stephen is the owner of Strategies for Success, a marketing company that focuses on the needs of budget minded small businesses and professional services. You can follow her on Twitter and Facebook.