The Difference Between Cash and…

How to Write a Business Plan for…

This article is part of our Business Startup Guide—a curated list of our articles that will get you up and running in no time!

What will it cost to start that business? Of course, you can’t know for sure, but you can work with reasonable estimates. You can break down the problem into simple lists and work through the lists. It’s always a guess—but you can make it a good educated guess. Here’s how.

Startup expenses are those expenses incurred before the business is running. Many people underestimate startup costs and start their business in a haphazard, unplanned way. This can work, but it is usually much harder. Estimating realistic startup costs is one of the key elements of your financial plan. Customers are wary of brand new businesses with makeshift logistics, and you can’t figure out how to manage startup costs until you calculate them accurately.

What are startup costs?

You should know that startup costs are not a universally accepted or carefully defined financial concept. Accountants and analysts disagree.

For planning and management purposes, we define starting costs as expenses you incur and assets you need before you can launch the business.

Cash requirements is an estimate of how much money your startup company needs to have in its checking account when it starts. In general, your cash balance on the starting date is the money you raised as investments or loans minus the cash you spend on expenses and assets.

As you build your plan, watch your cash flow projections. If your cash balance drops below zero then you need to increase your financing or reduce expenses. Many entrepreneurs decide they want to raise more cash than they need so they’ll have money left over for contingencies.

However, although that makes good sense when you can do it, it is hard to explain that to investors. The outside investors don’t want to give you more money than you need, for obvious reasons—it’s their money!

You can find experts who recommend you should have some set amount, such as six months’ or a year’s worth of expenses, as your starting cash. That’s nice in concept and would be great for peace of mind, but it’s rarely practical. And it interferes with the estimates and dilutes their value.

For a better estimate of what you really need as starting cash balance, you calculate the deficit spending you’ll probably incur during the early months of the business, after launch, from launch until you reach a monthly break-even state in which revenues are equal to spending.

Most new businesses take months and sometimes even years from launch until reaching that steady-state break-even point. I have an example in the illustration below. The startup in question estimates it needs $25,708 in startup cash to cover the deficit spending from January through June (that’s the number in the May column for cash balance).

Obviously, the real world is not as reliable as pre-launch estimates, so the right number for this business, for planning purposes, is probably $30,000 or more. But even six months of spending would be about $240,000 (an eyeball estimate based on the row in the illustration called “total spent”). That kind of cash in the bank would be nice, but usually completely unattainable.

The inputs to the table are all reasonably estimated, based on industry experience and educated guessing. The rows cover the basic inputs to cash flow analysis: First, payments to be received from cash sales and sales on credit (which is called payments received here). Second, money to be spent on operating expenses and buying inventory.

Please note that this is just one sample cash flow analysis. There are many different ways to estimate cash flow during the early months of a new business. Here’s a list of our best resources on cash flow.

Conclusion: For this business, we’d say it ought to have $35,000 cash in the bank as one of the starting assets. That’s based on the estimated maximum negative balance of $25,708, which you can see above in the May column of the bottom row, cash balance.

In theory, the maximum negative cash balance is the amount needed as initial cash. However, since all of the numbers in this kind of analysis are estimated, it would be a mistake to give the exact number -$25,708 too much importance. Even though it looks exact in the spreadsheet, it is just an educated guess.

So, a seasoned entrepreneur would round that up and add more, because forecasts are never exactly right. So in the following startup worksheet, below, the starting cash requirement is estimated at $35,000. That number respects the projections but errs on the side of caution.

The same defining point affects assets as well. For example, amounts in inventory purchased before launch and available at launch are included in starting assets. Inventory purchased after launch will affect cash flow, and the balance sheet; but isn’t considered part of the starting costs.

The establishment of a standard fiscal year plays a role in the analysis. U.S. tax code allows most businesses to manage taxes based on a fiscal year, which can be any series of 12 months, not necessarily January through December.

Many people can be confused by the accounting distinction between expenses and assets. For example, they’d like to record research and development as assets instead of expenses, because those expenses create intellectual property.

However, standard accounting and taxation law are both strict on the distinction:

This is generally much better than accounting for this expenditure as buying assets, such as patents or product rights. Assets look better on the books than expenses, but there is rarely any clear and obvious correlation between money spent on research and development, and market value of intellectual property. Companies that account for development as generating assets can often end up with vastly overstated assets, and questionable financial statements.

Another common misconception involves expensed equipment. The U.S. Internal Revenue Service allows a limited amount of office equipment purchases to be called expenses, not the purchase of assets. You should check with your accountant to find out the current limits of this rule.

As a result, expensed equipment is taking advantage of the allowance. After your company has used up the allowance, then additional purchases have to go into assets, not expenses. This treatment also indicates the general preference for expenses over assets, when you have a choice.

Why you don’t want to capitalize expenses:

I’ve worked with two methods for estimating and planning for starting costs.

The more traditional, which I call the worksheet method, involves separate worksheets for starting costs and starting financing.

The more innovative, which we use in our LivePlan software, simplifies with rolling estimates for expenses, assets purchase, and financing to manage cash flow as a continuum, with starting costs blurring into the cash flow equation and not being specifically set apart.

The traditional method uses a startup worksheet, as shown in the illustration here below, to plan your initial financing. The example here is for a retail bicycle shop. It includes lists of startup expenses in the upper left, startup assets in the lower left, and startup funding on the right.

Notice the balance here. One side shows the startup costs and the other shows where the money will come from. 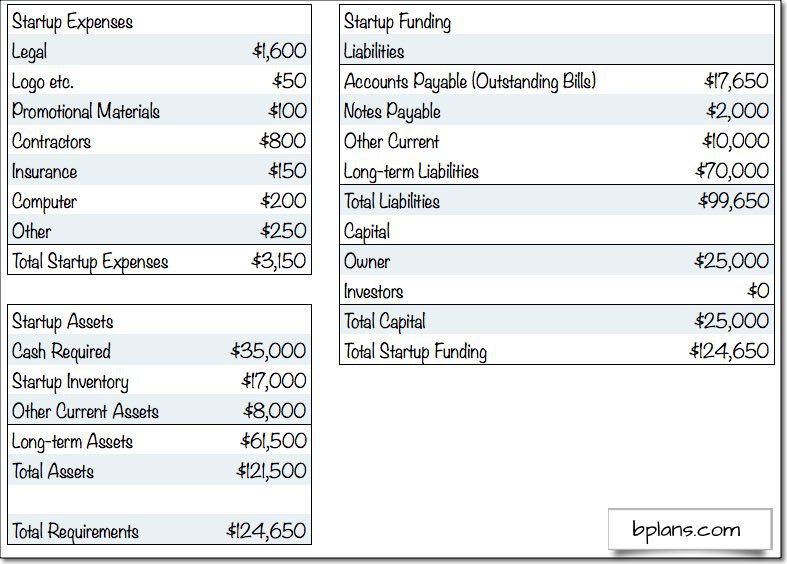 Notice also that the assets include $35,000 in cash and bank account. That estimate, in this example, comes from the example shown above, that calculates needing $25,708 in initial cash. The entrepreneur estimates $35,000 instead, to have a buffer.

Also, remember that the worksheet is about what happens before launch. It doesn’t include ongoing sales, costs, expenses, assets, and financing after launch.

This worksheet example shows an estimated $3,150 in expenses incurred before startup. That is the loss at startup, meaning that these expenses can be deducted against income later, for tax purposes. The loss at startup made sound bad on the surface, but having expenses to deduct from future taxes reduces tax bills. It’s quite normal. It’s also a good thing.

LivePlan suggests a different and probably more intuitive way to estimate startup costs. The key difference between LivePlan and traditional methods is the estimates start when a business starts spending rather than when it launches and starts getting revenues. There is no division between the launch date and pre-launch spending. So there is no specific startup table. 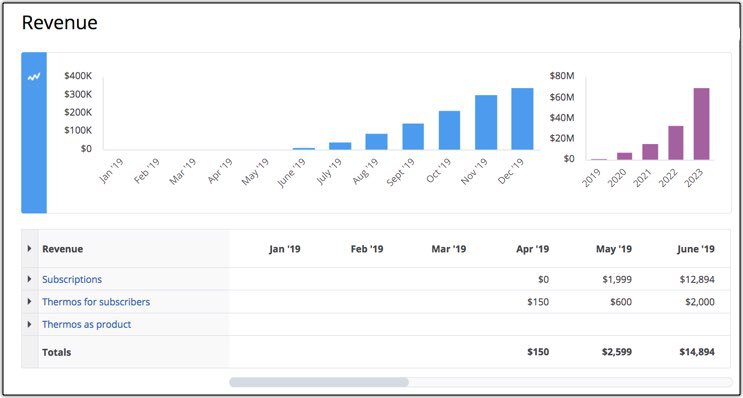 For example, in the Soup There It Is sample business plan, the revenue starts in April—but the spending starts in January. As you can see in the illustration here below, this startup estimates $11,500 in startup expenses, including $4,000 each in January and March plus $3,500 in March. 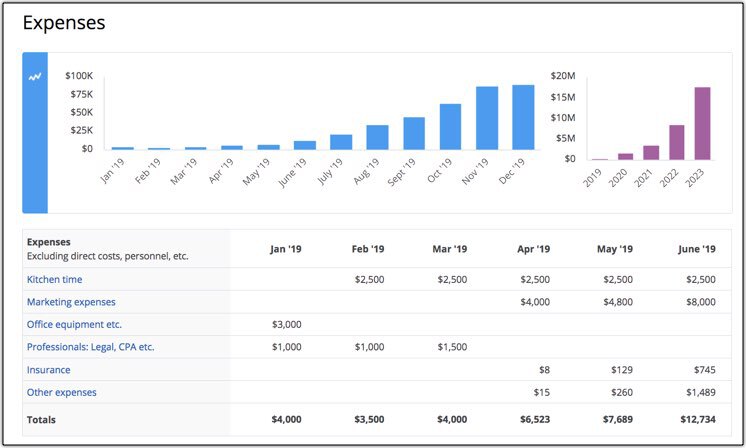 And the remaining $2,875 in accounts payable takes the sum of expenses up to the $11,500. Notice also that these deductible expenses create a loss at the startup of $11,500. (For a look at how these same numbers would show up in the traditional method, read on to the following section.) 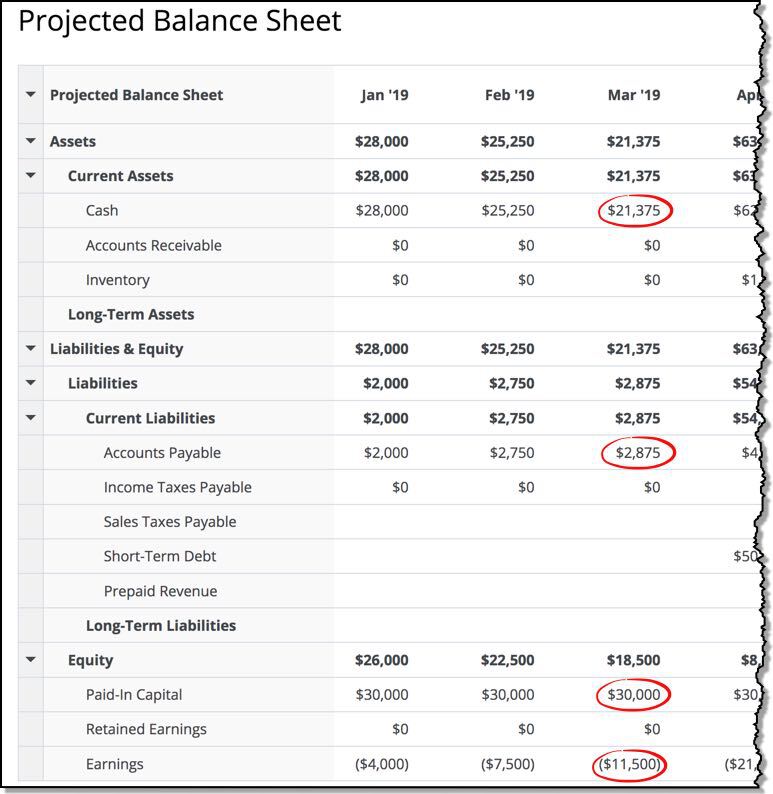 And how do you estimate, with the LivePlan method? Start with revenues, costs, and expenses (including payroll). Add in assets. And then solve the resulting cash flow problem by adding financing including loans and investments.

For example, here is how the Soup There It Is balance sheet looked before the founders added investment, loans, and inventory:

Do you see the problem there? A business plan isn’t done until the projected cash balance is above zero at all times. Otherwise, checks are bouncing, the bank is up in arms, and the business in trouble.

So the founders, as they develop their plan, first project money coming in and out, and from that, they can estimate how much financing, including investment, they need to make that work.

What’s the difference between the two methods? The following illustration shows how the traditional startup worksheet would look in the Soup There It Is plan. The plan would start in April, not January. And what the LivePlan method shows as happening in January through March is consolidated into the startup worksheet. See if you can see these numbers in the projected balance sheet for the LivePlan method, above. 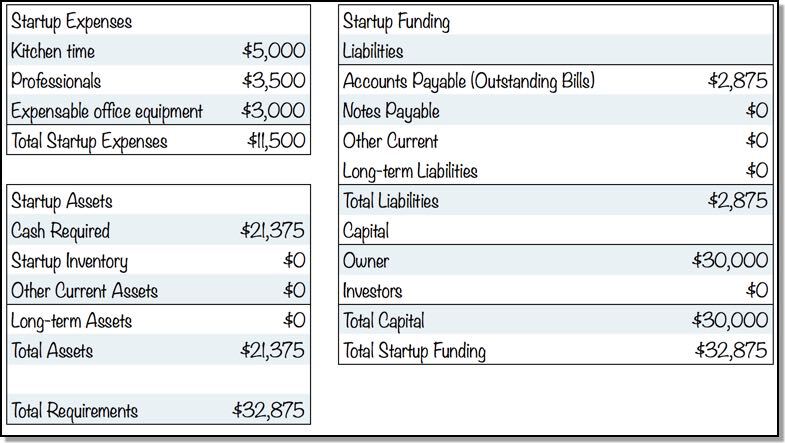 If you prefer the traditional startup worksheet method but are working with LivePlan, then you would set your starting date as April, not January; and you would set owner investment (in financing) as $30,000. You would use the starting balances option in LivePlan to set starting balances as $21,275 of cash, -$11,500 in retained earnings (the loss at startup) and $2,875 in starting accounts payable.

Here are your main options:

Whether you use the LivePlan method or the traditional method for estimating your startup costs, make sure you’ve considered every aspect of your business and included related costs.

It might be helpful to talk to a business mentor or someone else who has started a business in the same industry if you’re not sure if you’ve thought of everything right off the bat.

This article is part of our Business Funding Guide: fund your business today, with Bplans. Need help finding a loan? Try our small business loan finder.