Remember, there is no single way to forecast any business. It’s often very creative.

Magda was looking at forecasting sales for a small restaurant. She hadn’t locked in the location at that point, but she had a pretty good idea of the small size she wanted. She decided she would be able to seat six tables of four people each as a starting point. She knew that things might change when she actually decided on the space to rent, but she had to start somewhere, so six tables of four it was.

Then she did some simple math: six tables of four meant at capacity she would be serving 24 meals. Meals take about an hour at lunch, and about two hours at dinner. She figured she’d have one serving of lunch and two of dinner, roughly calculating the 5 to 5:30 crowd as the first serving, and the 7:30 to 8:00 crowd as the second serving. So an absolutely full lunch service in a day would be 24 lunches. An absolutely full dinner service in a day would be 48 dinners.

Now let’s stop for a second to consider this. Magda isn’t turning to some magic information source to find out what her sales will be. She isn’t using quadratic equations and she doesn’t need an advanced degree in calculus. She does need to have some sense of what to realistically expect. Ideally she’s worked in a restaurant or knows somebody who has, so she has some reasonable information to draw on.

So, Magda can do a simple calculation to figure a good day’s sales, when she is running at full capacity: 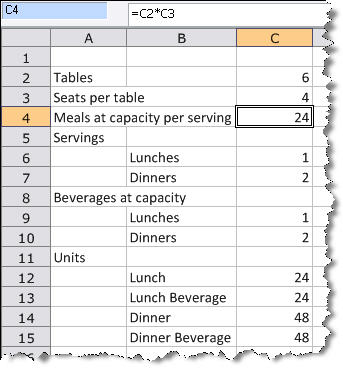 Having figured out what sales might be in a maximum day, Magda looks at how sales might vary for the days of the week. The provides a weekly base line. It isn’t just four weeks per month; multiply an average week times 52, then divide that product by 12 to get an average month. In the example, you can see how Magda estimated conservatively, with fewer dinners on Monday, and closing at lunch on Saturday and Sunday. She knows she’s not going to get a full capacity day that often. So she’s calculated a baseline month, with around 370 lunches and 1,044 dinners. But she’s also just starting up, so she comes up with an educated guess for a lot lower than that, around half the capacity.

These numbers are not magic. The point of this example is simply that Magda has to find a way to make sense of her forecast. As you work with yours, don’t look for some answer out there in the world, like a right answer to a puzzle; look for ways to break your assumptions down into the logic you need to work with them.

Magda should get on a computer and put her forecast in a spreadsheet. Make it four rows labeled Lunches, Lunch Beverages, Dinners, and Dinner Beverages. She should also add a row for Other, because there are always miscellaneous sales. Then she can spread these assumptions out with the simple math so she can see them on a month-by-month basis. (See the example below.)

If you don’t know how to work a spreadsheet, using formulas for rows and columns, read Spreadsheet Basics. Don’t fear the math, or the financing. 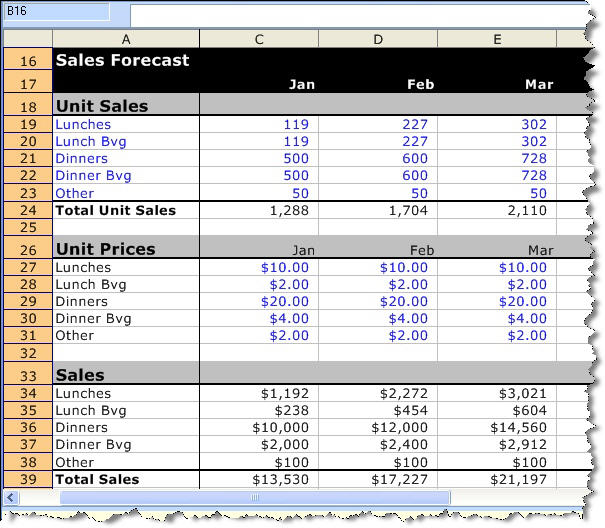 By the way, you can represent your forecast graphically, with the right tools. You might draw the line to help yourself visualize the way the numbers flow. Here’s an example of how a simple line graph can forecast Magda’s lunch sales for the first year.

Remember, please, these are not scientific numbers. They are based on assumptions. Magdo will review these numbers every month and tune them against reality. So therefore she doesn’t have to guess right for long stretches into the future; she just has to start with a reasonable guess and then start tracking.

Furthermore, you don’t have to be right from the beginning because as your business goes on, you constantly improve your forecast. After the first month, as you look at the second month and all the rest of the forecast, you have the results from the first month to work with. Always review, and revise as the review indicates.

Let’s say that when Magda’s first-month results are in, lunch sales are much lower than she thought, but dinner sales are slightly higher. (See the figure below.) 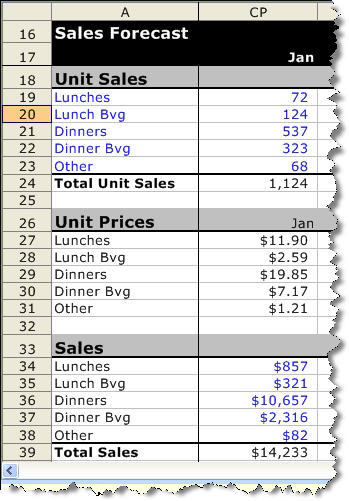 This next illustration shows the difference between what was planned and what happened. 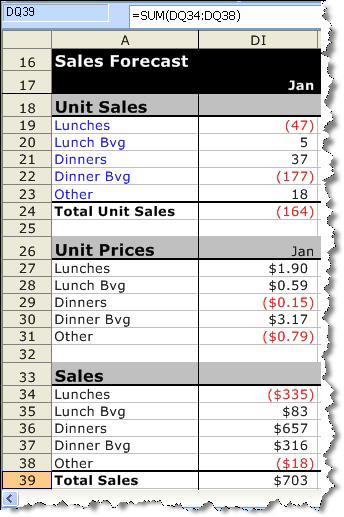 Using these numbers, Magda revises her sales forecast for the rest of the year. Why wait? She had a logical first guess based on some simple numbers, but now she already has real-world results. See the next illustration. 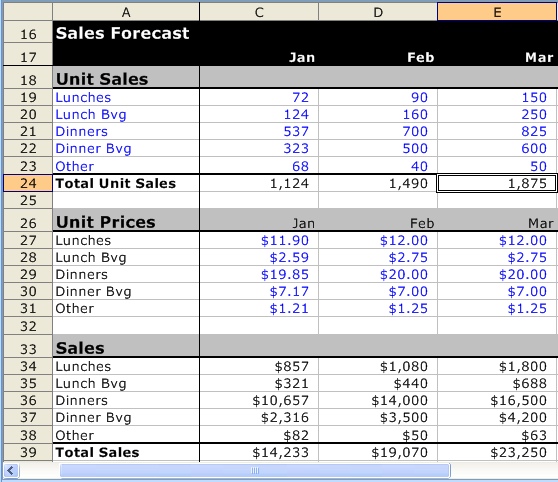 And now her sales forecast is up and running. Plan as you go.

How to Create an Accurate Restaurant Sales Forecast in 2022

Don’t Want to Plan? Just Do a Sales Forecast

How to Forecast Sales

How to Create an Accurate Restaurant Sales Forecast in 2022

Don’t Want to Plan? Just Do a Sales Forecast