How to Read and Analyze an Income Statement 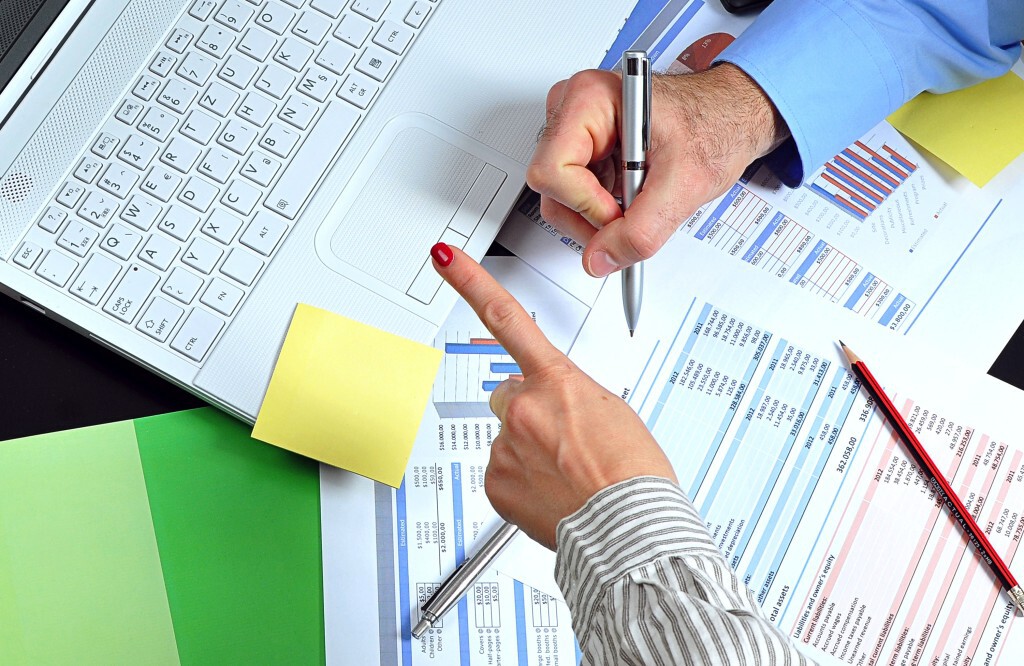 Ever feel a little left out when people start chatting about P&L’s?  How about when the talk turns to income statements, or profit and loss reports, or even a “statement of activities”? The first bit of good news is that all of these refer to the same thing, so you may not have as much to learn as you thought. The second is that an income statement is based on a  few very simple concepts, which you already understand.

The ones that people most often look at (and most often pretend to understand), are the latter two. The major difference between them is this: the balance sheet is essentially a snapshot, while the income statement is a movie. In other words, the balance sheet shows what you own (assets) and what you owe (liabilities) at a moment in time (most often as of December 31). The income statement shows what happens over a period of time (usually a year): what comes in, what goes out, and what’s left over at the end.

Here is an example of a basic income statement, covering the period of one month:

See how that works? The top section lists money coming in during the period, the middle section lists money going out, and the bottom line is the difference between the two. All the math you need to produce or proofread this statement is a little basic subtraction.

Now flip open the annual report of any Fortune 500 company and find the income statement. What you see, in basic concept and structure, will be exactly like the one above. The only difference is that it has a lot more lines. 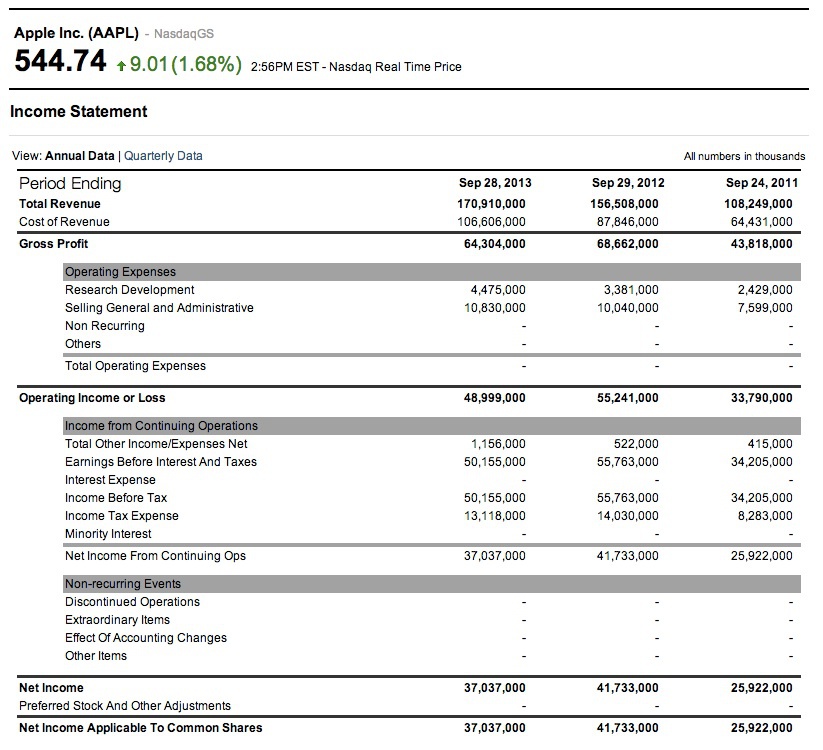 As companies get larger, they start making a few common variations on the structure. Many, for example, have a section at the top that starts with total revenue, then subtracts “cost of revenue” and shows the difference as “gross profit”.  The “cost of revenue” line is the total of all expenses the company deems to be directly related to generating the revenue, such as the cost of purchasing inventory. From the gross profit, they then subtract normal operating expenses, like administration and research and development, which leads to another sub-total called, usually, “operating income,” or, more jargonistically, EBIT or EBITDA (Earnings before Interest, Taxes, Depreciation, and Amortization). From that, obviously, interest and taxes (and maybe depreciation and amortization) have to be subtracted before the statement shows the final net income line.

All the complexity sketched out in the previous paragraph, though, is nothing more than a little rearrangement of the basic elements—income and expenses—into some sub-categories. The same principles still apply, even when things start to look complicated. No matter what, the income statement includes just income, expenses, and differences between the two. And income is always listed before expense in any group; it’s just that some companies do more sub-grouping before they get to the bottom line.

No matter what twists and turns you take along the way, the last number on the income statement is crucial. It is labeled “Net Income” above, but it also goes by names like “surplus,” “the bottom line,” or maybe “contribution to savings.” If the bottom line is a negative number, it will most often be called the “deficit” or “loss.” The math and the meaning are exactly the same; these are purely terminology issues.

If you’re asked to review an income statement and you’re not sure where to start, here are a few things to do:

Yes, errors occur even in printed, published statements; even in ones produced by major companies. If you find an error, you look smart—and you might also uncover something that changes the results completely. Also, as you run through the adding and subtracting, you will improve your own understanding of exactly how the numbers fit together.

2. Find the bottom line. (Should be easy—it’s at the bottom.)

On a very basic level, it’s good to see a positive number there. That means the company earned more than it spent during this period. That means it can pay its employees, keep the lights on, and not be forced to borrow money.  But if that bottom line is preceded by a minus sign, or printed in red, or enclosed in parentheses, then expenses exceeded revenue. Find out why. And what the plan is for making the red turn to black.

A net loss once in a while does not necessarily imply disaster. Sometimes new companies have a lot of start-up costs and do not expect to turn a profit in the first year or three. Or maybe the business in question is a cyclical one, like agriculture: if your company grows corn and there was no rain this year you will likely show a loss.  Perfectly normal; some years are up; some are down. On the other hand, if net losses become a trend, or if the company does not have enough cash to fund its expenses during the down times, there could be a problem.

3. Look at the sources of income.

Do they make sense for the business? For example, if you’re in the cotton candy business, then sales income from the county fair sounds right. But if one income line is “gifts from friends” that’s probably not sustainable. What about next year when those friends don’t come through again?

Or say you’re reviewing the statements for a museum. Ten percent of their income came from admission fees last year and 90 percent came from ticket sales for a special blockbuster exhibit that came through town. Fine, as long as there will be a new blockbuster exhibit every year. If that was a non-repeatable event, though, you will want to ask questions about whether the revenue model is sustainable.

4. Look at the expense categories.

Are they logical? For most businesses, you will see salaries and wages, insurance, rent, supplies, interest, and at least a few other things. Is anything missing that you would expect to see?  For example, if the business has a hundred employees and you don’t see rent, or mortgage interest, find out why. Is there an office? If not, why not? If yes, how is it being paid for?

5. Now look at the amounts: What are the biggest expenses?

If this is a service business, expect to see a large number for salaries. If it’s a manufacturing business, materials and supplies may logically be a significant total. On the other hand, what if you know the company has only three employees but the salary line is extremely high? Is someone being overpaid? Are there more people working there than you realized? Or what if the president told you the company has been profitable for years but you see high interest expense? Find out why the company is borrowing money, and from whom, and whether they’re paying a reasonable rate.

Usually, the income statement will have separate column showing the figures for the prior year. If the document doesn’t already show the percentage change in every category, calculate those numbers yourself. Question any significant changes. Like, why is sales income 50 percent lower this year than last? Why is insurance 20 percent lower? Did the entity rack up such a great safety record that the insurer lowered its rates? Maybe. But maybe the reduced insurance number has a negative cause—like one of the policies was canceled and the company is at risk in some way.

7. Think about logical relationships between numbers.

For example, at most companies these days employee benefits (like health insurance, retirement plan contributions, parking passes) are a significant cost. If the salary line doubled but the benefits number went up by only 10 percent, that should strike you as odd. Is there some reason the new employees do not qualify for benefits? Did the company drop one of its benefit plans?

All these questions may have perfectly reasonable answers, but sorting through them will help you understand what’s going on, and give you confidence that you know what you’re talking about when it comes to income statements.

You do. Revenue minus expenses equals the bottom line. Everything else is details.

Ready to get started? Download our free Profit and Loss Template today.