The Myth of the New and Only Idea

Dammit, I don’t get it: What is that makes people think that once a business idea has been developed as a business that then it’s over, nobody else can do it, and anybody who tries to is a lesser human?

You know what I’m talking about. 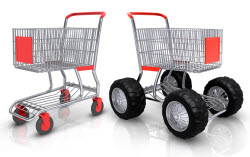 Two or three people brainstorming about business and business ideas . . . one comes up with something he likes . . . and another one shoots it down with “nah, that’s already been done.” As if you can’t do it because somebody else already did.

For that matter, with completely new ideas that have never been done, don’t you have to worry, why not? What is the rest of the world thinking that hasn’t occurred to you yet?

What do you think?