Why Founders Sometimes Fail as CEOs

Writing in TechCrunch, Ben Horowitz offers three reasons why founders fail as CEOs. The most interesting is the third: 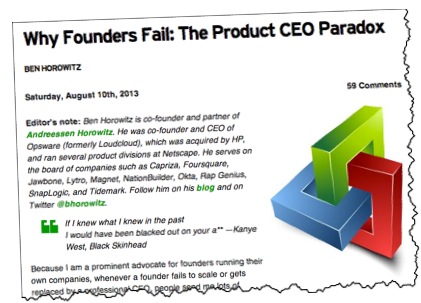 I don’t like the second because it’s too narrow. What Ben calls board panic can also be board management. Calling it “panic” implies that the board failed, not the founder-CEO, every time a board removes a CEO who doesn’t want to go. I think founder CEOs who want to manage the company sometimes do a poor job of it.

The third one is the most interesting. Ben explains:

This happens all the time. A founder develops a breakthrough idea and starts a company to build it. As originator of the idea, she works tirelessly to bring it to life by involving herself in every detail of the product to ensure that the execution meets the vision. The product succeeds and the company grows. Then somewhere along the line, employees start complaining that the CEO is paying too much attention to what the employees can do better without her and not enough attention to the rest of the company. The board or CEO Coach then advises the founder to “trust her people and delegate.” And then the product loses focus and starts to look like a camel (a horse built by committee). In the meanwhile, it turns out that the CEO was only world-class at the product, so she effectively transformed herself from an excellent, product-oriented CEO into a crappy, general-purpose CEO. Looks like we need a new CEO.

That’s a brilliant observation. Ben’s highlighting one of those ideas that seem obvious but only after somebody has pointed it out. I think his product CEO paradox is real, and a danger to be aware of and to avoid.