The phrase “lean startup” comes up a lot in conversations about entrepreneurship. I’ve been to several panel discussions on the topic, had it taught to me in a business school classroom, and read a book dedicated to lean startup methodology. Despite all of this tutelage, I often wondered if the theories were just a gimmick—until it came time to build my own business.

The ideas behind lean startups can be drilled down to a few straightforward ideas:

Over the last year, the combination of these ideas has changed the direction of my business, PopInShop, an online platform that connects emerging designers and retail brands with independent boutiques across the country. The end result is that brands can get exposure in new markets by setting up pop-up shops or trunk shows within existing brick and mortar storefronts that are a good fit for their product, and store owners get a source for consigned merchandise to attract new customers and engage existing customers.

When I first started PopInShop, I pitched it as a marketplace for brands and boutiques—I said it was ”like the AirBnB for retail.” But after following the lean startup principles and learning from my initial customers, I now pitch PopInShop as an online dating site for brands and boutiques—I say it’s ”like the eHarmony for retail.” It’s a nuanced difference that has had significant implications for our product development and business model.

This is the path my business took from the “idea phase” to our current product, using the lean startup methodology.

In my experience, the most organic lean startup principle to implement is the incremental use of resources. Like many entrepreneurs, we didn’t have a choice on this matter since capital for PopInShop trickled in gradually. First, I won a pitch competition with a $1,000 prize. Then, we were approved for a $4,000 grant. Finally, we got a small round of seed funding from a local investing group.

Each of these milestones happened a few months apart, so at no single point did we have enough capital to hire a developer and create our fully-imagined retail marketplace. Instead we asked ourselves a lean startup question at each juncture: How can we use this money to get in front of our customers so that we can re-evaluate and revise our product?

Our customers are retail brands and stores, so the first step was to build out a basic version of our website to reach these companies. In lean startup speak, this was called a minimum viable product, or MVP. We designed an attractive landing page and a simple registration process. We wanted to answer the most basic question about our business: Would brands sign up for our services, and would they pay us for what we planned to offer?

We could have sent out surveys, but with a lean startup, the goal is to get closer to a real market response. So we represented ourselves as the business we believed we’d become, and emailed 100 brands. Fortunately, nearly half wanted to give us a shot. Brands were more desperate for our service than we’d originally anticipated because the alternatives in the market were worse than we’d realized.

We used this information in our grant application, and when that second round of capital came through, we asked ourselves again: How can we use this money to get customer feedback? We’d learned about brand response to PopInShop, but boutiques were wary of our non-existent track-record.

We decided to used our grant funding to pay stores upfront to rent space on their floor. This was the quickest way to build credibility for future sign-ups, and to collect valuable data on the in-store experience. We sectioned off corners, shelves, and window space in participating boutiques and then sourced product from the brands in our initial outreach campaign. We set up displays with iPads so that shoppers could buy the products in our sectioned-off areas more easily. 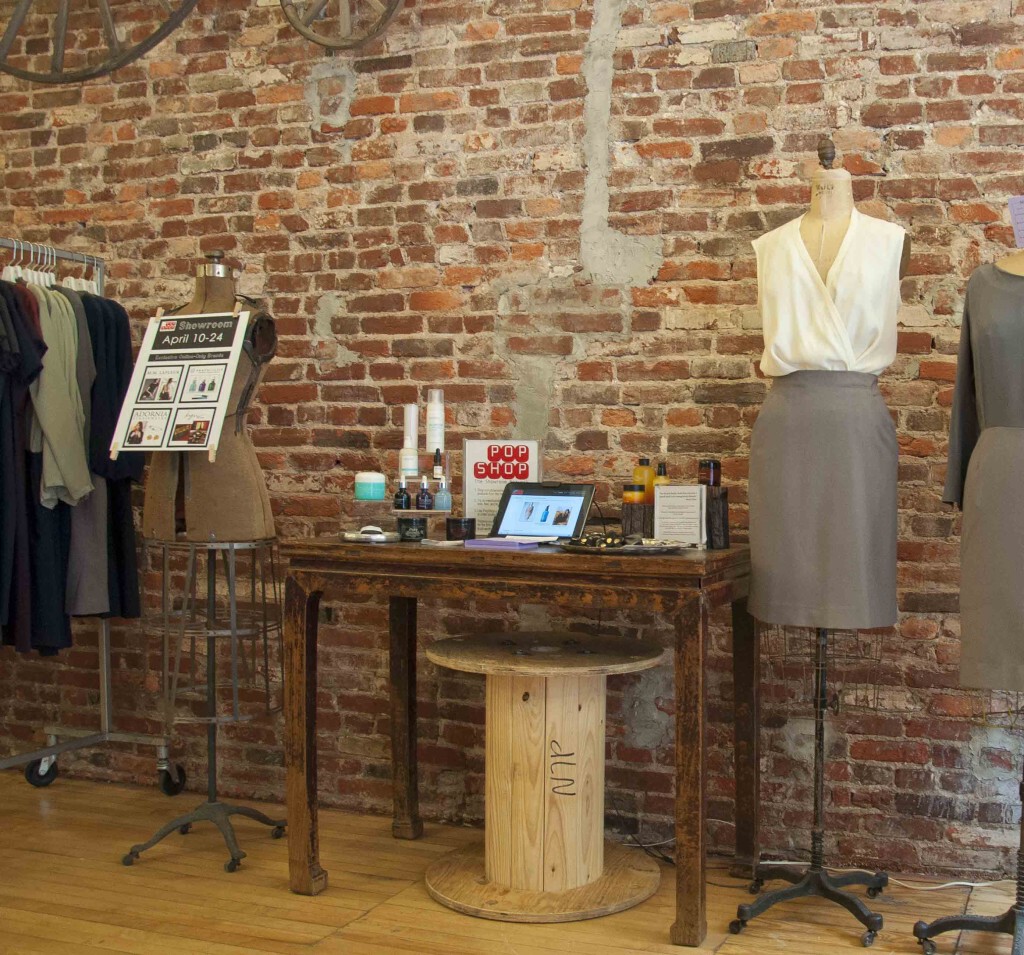 The in-store display at PopInShop’s first pilot event at a boutique in Philadelphia.

Unfortunately, it turned out that shoppers didn’t want to buy from iPads in a boutique environment. It also turned out that store employees didn’t have much incentive to direct shoppers to our products when we’d already paid the store upfront.

Intuitively these qualitative findings and the statistics that backed them up seemed less valuable than our assets. After all, we now had an MVP. We had users. We even had a prototype for an iPad purchase display. But the lean startup approach is about getting closer to product-market fit, and these findings indicated that we needed to rethink our product roadmap and our business model.

Revising and re-launching the product

As we evaluated other models for online platforms, we remembered some of our early customer conversations. Many brands and stores had described PopInShop as a matchmaker when paraphrasing our pitch back to us. We hadn’t thought much of the analogy beyond its implications for sales and marketing, but now we dug deeper. We looked into the digital equivalent of matchmaking—online dating—and found that the user experience on premium sites was more about curation and recommendations than a pure marketplace. We also found that these sites had different revenue models, charging membership fees or performance-based matchmaking fees as opposed to only taking a commission.

Why Even Lean Startups Need a Business Plan

How Persistence Won Me The Business Grants I Needed

Why Even Lean Startups Need a Business Plan

How Persistence Won Me The Business Grants I Needed